Credit Repair Cloud’s motion to dismiss was denied. What does this mean? 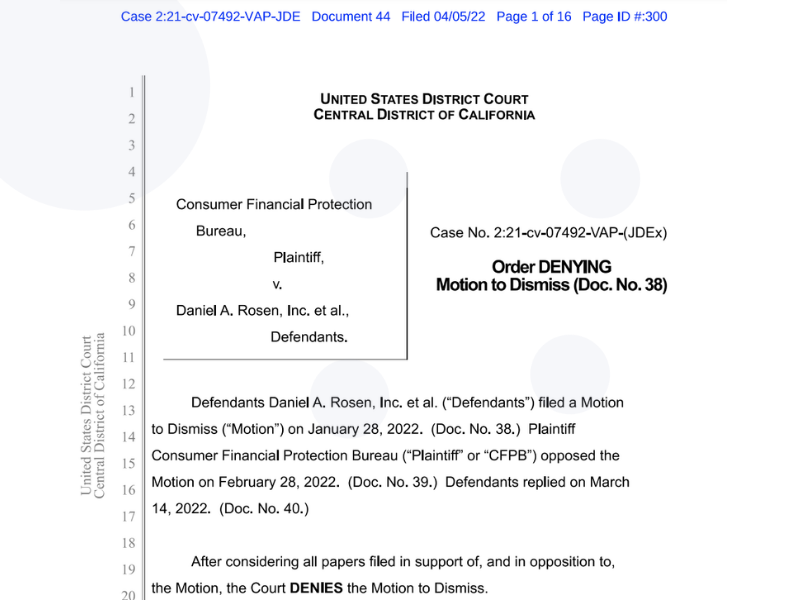 Credit Repair Cloud’s motion to dismiss was denied. What does this mean?

This article is written by a non-lawyer and should not be considered legal advice.

The Consumer Financial Protection Bureau (CFPB) sued Credit Repair Cloud (CRC). In response, CRC moved to dismiss that lawsuit. Rather than explaining both, I’ve decided to go through the Judge’s order, which explains everything perfectly.

To understand the procedural posture of the case (i.e., where are we in terms of a resolution), you should understand a motion to dismiss.

Typically, you “answer” a lawsuit against you by admitting or denying the allegations in it. Then you move on to litigation. However, there are legal maneuvers you can do before a responsive pleading. One example is a motion to dismiss.

In a motion to dismiss, you’re telling the judge to toss the case in whole or in part due to some kind of legal flaw with the lawsuit.

In the case of CFPB’s complaint against CRC, that’s what just happened. The judge denied the motion to dismiss and the case is moving forward.

First of all, courts are usually confined to the “four corners” of the pleadings before it on a motion to dismiss. This means that they can’t consider things outside of the documents before the court. In rare situations, it can. It did so in this case.

The Court considered a letter from Congress to the CFPB asking for clarification on the distinction between the Credit Repair Organizations Act and the credit repair provision of the Telemarketing Sales Rule (TSR).

More about that is below.

The Court: CFPB Can pursue charges against CRC and its users are “covered persons” under the law.

One of the main points CRC argued is that the CFPB didn’t have the right to sue CRC. The root of CRC’s position is that CFPB doesn’t have jurisdiction over credit repair companies.

Interestingly and alarmingly, the court basically said they’re the same thing for the purpose of determining which activities the CFPB can regulate under the CFPA.

In fact, the Court went further than credit repair. It went ultra general (which basically expanded the reach of the CFPA) suggesting that:

I think the Court got something majorly wrong.

This is indefinitely erroneous.

Credit repair companies do not have the power or the ability (let alone the lawful authority) to “provide” consumer report information.

Nevertheless, this judge entertained this allegation at the dismissal level.

The Court: CRC is a “service provider” under the law.

Secondarily, CRC argued that it is not a service provider under the CFPA because it does not provide material support to a covered person (i.e., credit repair companies).

That law regulates not only “covered persons” but also “service providers” which basically means “any person that provides a material service to a covered person.”

I’ve excluded the full definition so you don’t mentally apply your own meaning to it.

Instead, here’s how the judge applied the definition to CRC:

For those reasons, the Court concluded that CRC is a service provider under the CFPA.

The Court: The CROA and the TSR do not conflict.

CRC argued that the CROA is the law of the land and, therefore, the credit repair provision of the TSR is invalid.

CRC is not alone in this argument. They join a growing list of parties who have asserted and lost this argument. I think this is the 6th time this has been argued… and failed.

The courts, like sophisticated parrots, have quoted the same conclusion of law… every time.

The only difference between this case and others is that they addressed (and swiftly disposed of) the letter from Congress.

Although Defendants cite a November 7, 2019, Letter from Congress to CFPB Associate Director Bryan A. Schneider (“Letter”), this Letter is unpersuasive as it provides no support as to whether the CROA in fact conflicts with the TSR.

The Court: The substantial assistance allegations can move forward.

We discussed substantial assistance and observed that it’s very complicated, subjective, and construed on a case-by-case, fact-by-fact basis.

For those reasons, the Court concluded that CRC is not entitled to dismissal on the claim that it provided substantial assistance to credit repair companies in violation of the TSR.

Surviving a motion to dismiss is not difficult. Now the case will move to legal proceedings which reach the merits of the case, such as motions for summary judgment or trial.

Typically, it’s not instructive or predictive to look at a Court’s ruling on a motion to dismiss. However, the order denying CRC’s motion to dismiss was not typical. It was extremely thorough, researched, and conclusive.

It’s safe to assume that future orders on the merits of this case will likely mirror this order.

This does not look winnable for CRC.